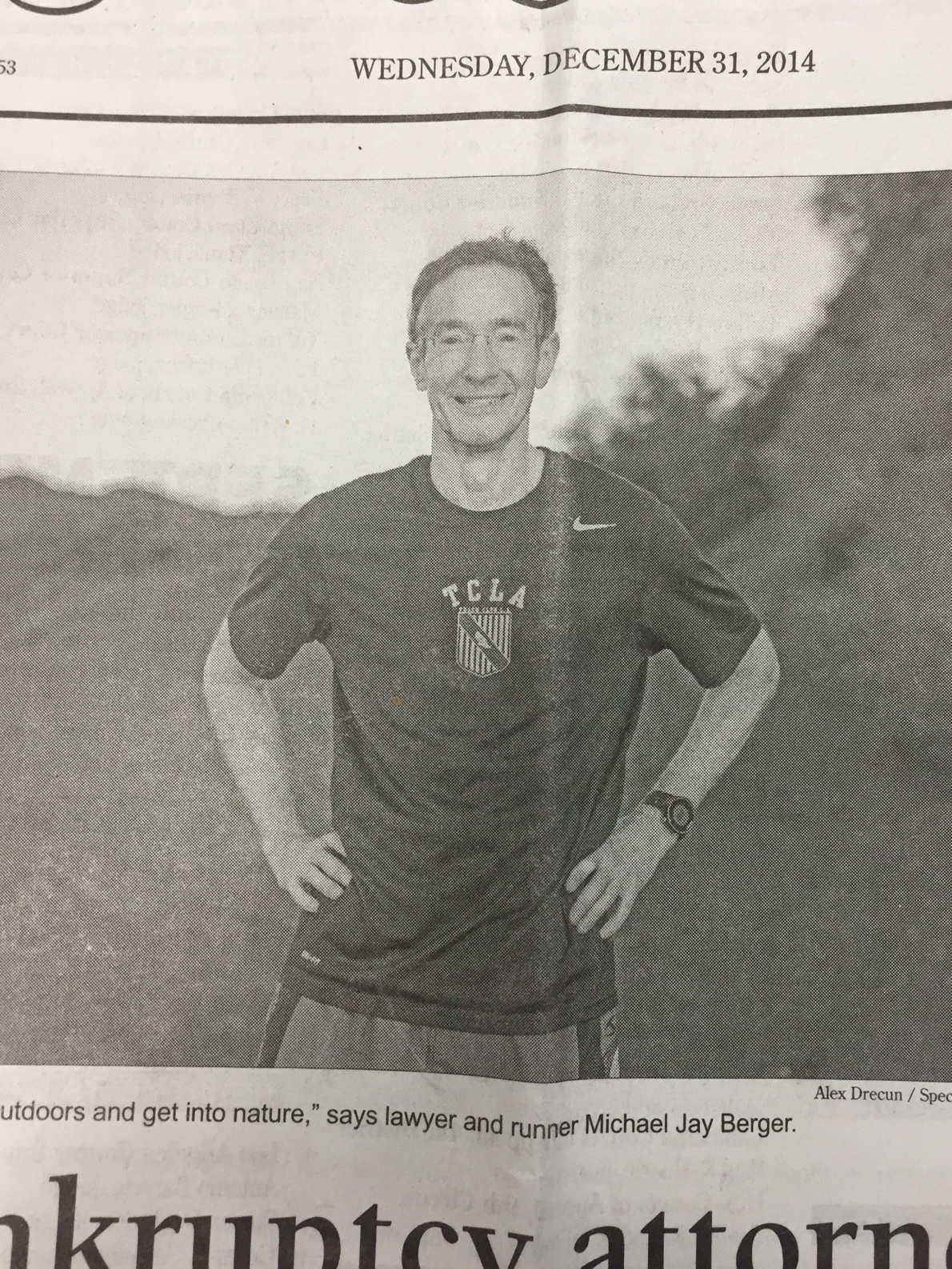 For Michael Jay Berger, staying fit isn’t a sprint, it’s a marathon – and then some. At 57, the Beverly Hills bankruptcy specialist is an avid runner who finds time for routine training and, occasionally, more ambitious outings.

This year, he participated in the Comrades Marathon, a 56-mile “ultramarathon” in the South African desert.

“I think running is a very popular hobby in the legal profession,” Berger said. “I know lots of attorneys who like to go out and run whether it is on a track or cross country. I like trails as well. It’s good to run outdoors and get into nature.”

Before becoming a distance runner two decades ago, Berger raced cars. After a trip with coworkers to Beverly Hills High School, where the group took a few turns around a racetrack, Berger was smitten with the sport. That same year, he noticed a sign for the Los Angeles Marathon and it’s affiliated 5K race. Berger and his girlfriend signed up.

“I was just starting out, so I was worried if I’m going to finish last and if my girlfriend is going to beat me. But fortunately neither thing happened,” he said.

The 1994 Los Angeles Marathon was Berger’s first official marathon. Since then, he has conquered races in Houston, New York, and Boston.

“The Boston Marathon is actually my favorite in the U.S.,” he said, “I’ve run it seven times.”

Berger’s marathon experience has served as an precursor to ultramarathons, which challenge entrants with distances sometimes well beyond the standard 26.2-miles. The Comrades Marathon in South Africa is one of the world’s most widely followed races because of its long history and grueling conditions.

“I know that people around here mainly think of Boston and New York as the big marathons but Comrades is one of the best running events in the world,” Berger said. “About 18,000 people sign up and start the race and it is on TV all day long over there.”

Aside from finishing the Comrades race, Berger said meeting its diverse contestants was a highlight of the trip.

“The great thing about that race is that there is more time to chat … and when you run you can just look at someone’s bib and learn so much about them. It will tell you where they are from, how old they are, and how many Comrades they have finished in the past. One guy was trying for his 40th completion, which is amazing since they only happen once a year.”

Berger has participated in the Javelina Jundred, completing 100 kilometers – about 62 miles – on a course in rural Arizona.

Despite his accomplishments, Berger’s running goals remain ambitious. Next month, he’ll compete in the Rocky Raccoon race in Huntsville, Texas.

“It is a 100-miler but it is also going to be the USA Track & Field national championships. So hopefully I’ll be able to get another medal and I’m hoping to place in my age group. There are going to be some really great runners there, world-class athletes. I’m not going to win the race but a first, second, or third place finish in my group would be really sexy,” he said.

Despite falling in love with the sport later in life , Berger said running has had only positive effects on his health. Asked about joint and back injuries – common concerns in the running community – Berger said his doctor has always given him clean bills of health.

“I’ve thought about some of downsides as far as the health impact goes but for me it has always been a positive experience all the way along. I guess I’m blessed for having what people call a runner’s build. And I do cross training as well so I am mixing it up.”

Berger credits his membership in training groups with his success as a runner.

“I was a member for a little while with the L.A. Leggers but now I primarily run with Track Club L.A. on Tuesday nights and we go run the track at Santa Monica College.”

Across town from Berger, Santa Monica bankruptcy attorney Leslie A. Cohen has made running a part-time passion. Cohen has helped get her three-attorney firm in on the exercise. Over the last few years, she has been organizing the Leslie Cohen Law 5K. This year’s race will be held on April 11, 2015 in Malibu.

“I even started a running group for our law firm,” Cohen said. “And while we do dominate every race we participate in, at the end of the day it is about having fun and exercising and it is a great way to do it.”

Cohen said that she and Berger train together occasionally and also keep in touch on Facebook. She has completed six marathons herself but said that she has not yet attempted to keep pace with him on his longer excursions.